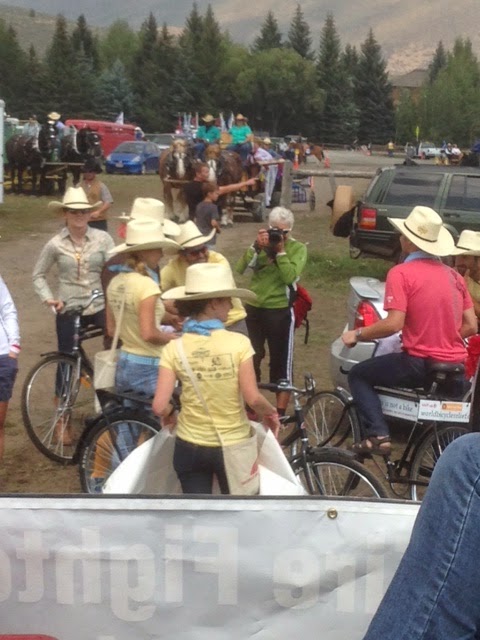 Friday night we headed to Idaho to see my brother Andrew. We were exhausted and late but we made it just in time for bed. On Saturday I decided to tag along with my three youngest kids to the Wagon Days parade in Ketchum, Idaho where my niece was going to be riding a wagon to support the MDA.

When we got there they asked the whole family to ride in the wagon, including us. After all, we were an MDA family as well. Ariana pushed my wheelchair across a huge dirt and gravel lot, they loaded it up into the wagon and we were suddenly in a parade.

I had no makeup on and I’d forgotten my hairspray but I didn’t care. I was having a great time!

The Ketchum fire department was amazing. They were friendly, took pictures with the kids and were just awesome. They did all they could to help me and kept thanking us for being there.

The firefighters were out there with their boots collecting money for the MDA as part of the Fill the Boot campaign as we waived and yelled from the wagon with another MDA family. In the hour of the parade they were able to raise $6500 for the MDA.

By the end I was exhausted and never did really recover. I had cancelled most of our hoped for trips and had gone ahead with this one but it took a lot more out of me than I would have hoped, probably because I’d had a bad attack earlier in the week.

Once we got back and also found out that my oldest son was sick, we packed up our stuff and cut our weekend short. We made the four hour trip home safely and climbed in our beds at 11pm. Thank you to my brother and his wife for great food, a fun parade and rides on the horse!!